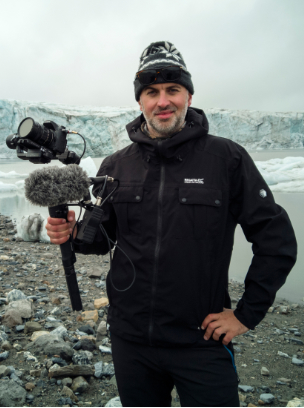 Kuba Witek – documentary film director. For the last seven years he has worked in Greenland, Spitsbergen, the Faroe Islands, Iceland, as well as Poland and the USA as a documentarian, book author, and speaker. He is fascinated by the North whose inhabitants and nature are most affected by climate change and destructive activity of mankind.

In 2019, he participated in the AREX’19 scientific expedition to Spitsbergen, where he documented the work of scientists and the melting Arctic in the film “Ruch Lodu” (“Ice Movement”). In 2022, he was a member of the Lithuanian-Polish group investigating the post-glacial lagoon in the Eidembukta Bay area in eastern Spitsbergen as part of the ADAMANT project. His projects were developed in collaboration with, among others, National Geographic Poland, the Institute of Oceanology of the Polish Academy of Sciences in Sopot, Polish Radio, Greenpeace, the Embassies of the Republic of Poland in Copenhagen and Reykjavik, and were promoted by TVN24 television, the main Polish daily magazine called Gazeta Wyborcza, naTemat.pl, the Polish Polar Consortium, the Polish Academy of Sciences, and the Faroese public television KVF.

His films were shown at film festivals all around the world, including the Polish Film Festival in Los Angeles. Winner of the GRAND PRIX award at the MediaTravel Festival in Łódź for the film “ISOLAND: Islandzkie historie polskich emigrantów” (“ISOLAND: Icelandic Stories of Polish Emigrants.”) He is a graduate of the University of Central Lancashire in Preston. 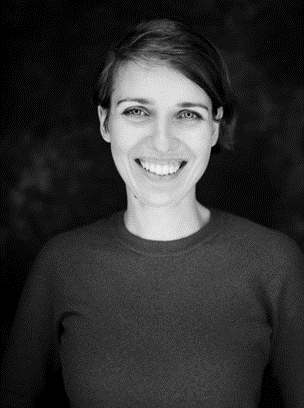 She participated in the 35th Polar Expedition of the Institute of Geophysics of the Polish Academy of Sciences to the Hornsund Polish Polar Station in Spitsbergen (2012-2013) and in the 40th Antarctic Expedition to the Henryk Arctowski Polish Antarctic Station on King George Island (2015-2016). She works in both national and international projects (Eduscience, EDU-ARCTIC, EDU-ARCTIC2, EDU-ARCTIC.PL, POLAR STAR) promoting research in polar regions. She is the winner of the Magellan Award 2020 for the biography of Ryszard Czajkowski.

She received a scholarship from the Ministry of Culture and National Heritage for the Polarniczki.pl project, dedicated to women working at polar stations. 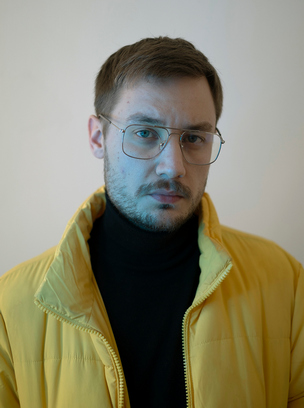 Łukasz Palkiewicz “Szatt” – producer from Racibórz, currently living in Wrocław. Musically somewhat difficult to classify, but finds electronic music as the closest to the organic sound.

He has three solo releases to his credit. Self-published “Future Voices” (2013), “Bloom”, which was released in 2015 by the Asfalt Records sublabel – “Flirtini”, and the latest album “Gonna Be Fine” released by Dig a Pony Records in 2020. He shares his music in the form of live acts, which he presented live over the last decade in many cities in Poland, including one of the biggest festivals – Open’er Festival. Together with vocalist Jaq Merner and bassist Paweł Stachowiak – as the band called Kroki – they recorded four albums released by Kayax: the debut “Stairs”, “Controlled Chaos” and two EPs – “Underwater” and “Damage”.

He shared the stage with stars of worldwide music, such as: Taylor McFerrin, Lapalux, Sun Glitters, Cid Rim, Iamnobodi, as well as with Polish artists such as Piotr Rogucki, Paulina Przybysz and Iza Lach.

He is the author of the soundtracks to films directed by Kuba Witek: “ISOLAND: Islandzkie historie polskich emigrantów” (“ISOLAND: Icelandic Stories of Polish Emigrants”), “FAROE WAY: Sztuka przetrwania na Wyspach Owczych” (“FAROE WAY: The art of survival in the Faroe Islands”), “RUCH LODU: Podróż przez topniejącą Arktykę” (“ICE MOVEMENT: Journey through the Melting Arctic”), “Together in Isolation: The lockdown of the Faroe Islands”.